The really light ones. 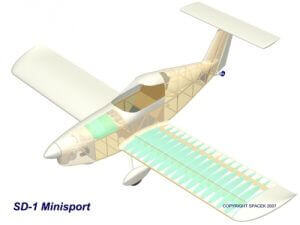 The fuselage is of wood truss design with prevalent section 15×15 mm covered with plywood of 0,8-3 mm thickness. The pilot seat back is inclined under 40°. This assures comfort also for 185 cm (6,1 ft) tall pilot in standard version. The height of cabine is possible to modify for taller pilot if necessary (up to 2 m pilot in XL version- see following folder). The inside width of cockpit in shoulder place is 54 cm (21,3″). The plywood tunel with wing and upper gear legs mounts (TD) is located under pilot knees. The baggage compartment of 40 l (1,5 ft3) is behind removable seat back. Additional baggage compartment could be created behind the pilot bulkhead when the rescue system is not fitted in. The composite cabin hood with polycarbonate windshield of 1,5 mm thickness opens to the right side and could be performed as lockable. The NACA inlet for ventilation is on the right side of cabine hood.

Two half wing uses GA 37U-A315 airfoil. It consists of composite main spar with carbon caps on which are glued ribs made of extruded polystyren. It is covered with 1 mm plywood. Wingtips are made of extruded polystyren with fiberglass layup or premolded are vacuum bagged sandwich. The weight of painted wing half is 12 kg (27 lbs). Connection of wings to fuselage is made thru two main and two auxiliary pins.  Disassembly of wings takes 5 and assembly 10 minutes. The connection of flaperons to controls is performed by simple inserting of control pin into slot.

The all movable horizontal tail (HT) has anti-servo tab and is statically balanced. Tails are of similar construction as wings- on composite spar are attached polystyrene ribs and plywood skin. Spring trimming is under the pilot seat. Disassembly of HT is done by disconnection of control and tab rods and pulling out of pin. The fin has main composite spar with carbon caps and HT hinge.

Could be performed in TD, TG or TGC version. See description in following folders

The horizontal tail and flaperons are controlled via pushrods and bellcranks. The flaperon mixer is under seat. The rudder is controlled via cables of 2 mm diameter.

The integral tank of 35 l  capacity is placed behind firewall. It is made of fiberglass-PVC foam sandwich.

The bus is powered by battery and is charged by alternator on all offered engine kits. It is possible to place 12 V outlet under instrument panel for GPS etc.

The airplane is usually fitted with basic flying instruments-airspeed indicator, altimeter, compass, vario and slip indicator. The EFIS-es up to Dynon SV-D700 size could be used. There is enough space for any engine gauges combination. There is place for COM transceiver and TPD with installing diameter of 57 mm in the instrument panel. The COM antenna is built in the airframe.

It is possible to built airplane also less rescue system.